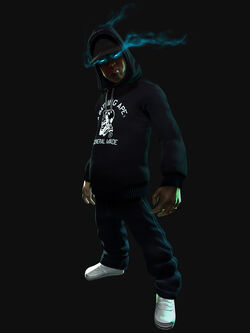 DJ Shadow is a DJ playable character that appears in DJ Hero. He is considered a prominent figure in the development of instrumental hip hop and first gained notice with the release of his highly acclaimed debut album Endtroducing....., which was constructed entirely from samples. He has an exceptionally large record collection, with over 60,000 records.

Retrieved from "https://djhero.fandom.com/wiki/DJ_Shadow?oldid=4209"
Community content is available under CC-BY-SA unless otherwise noted.